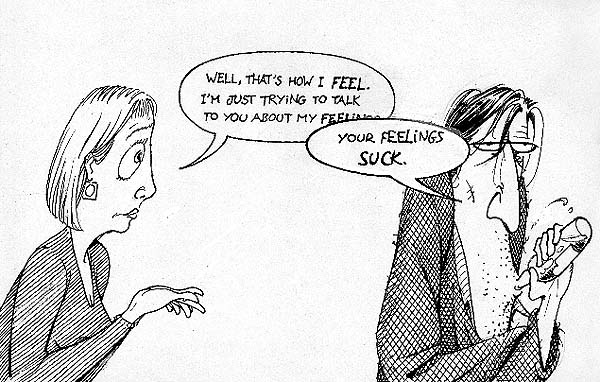 I don't have much sympathy with the pop-psych notion of Feelings as some inarguable thing, beyond your control, like God or the laws of physics, that you can appeal to or hide behind to justify whatever selfish thing you want to do. (Like: "I feel like being an asshole." "I feel like treating you like shit.")

I am a little worried that people will misinterpret this cartoon as so much Lockhorns-level misogyny--another insensitive male rolling his eyes at women and their precious "feelings." But I only made the characters a couple to universalize the situation. To me this cartoon isn't really about romantic relationships at all.

This drawing was actually inspired by my friend Ben Walker, a former cartoonist and the host of Your Radio Nightlight on WZBC in Boston. He was down here last week for the annual Small Press Expo in Bethesda, a convention of alternative cartoonists. When he saw the cartoon I was originally planning to run this week he was disgusted with me. It was an older one that isn't even a drawing, but a sort of photo montage. I explained that it was a busy week what with his visit and the Expo and all, and I just hadn't had time to draw anything new. Besides, I said, I thought it was funny enough. He told me it wasn't funny, he was embarassed to see me running it, he couldn't believe how lazy and unambitious I was, if he was as talented as I was he'd be working his ass off to do the funniest fucking cartoons he could and make himself famous. He gives me this speech a lot. He's one of these guys who thinks his tactless, gotta-call-'em-like-I-see-'em, read-'em-and-weep criticisms are a mark of integrity and secretly valued by his friends, which they're not. He'd hurt my feelings and even he could see that I was getting pretty annoyed with him.

"Your feelings suck," I said. Which we agreed would make a pretty good cartoon. I sat down to draw it while he stood over me smiling with mean satisfaction and forced me to admit that he had driven me to excel. So okay: grudging thanks, Ben, for inspiring this cartoon and for shaming and pestering me to momentary productivity. Sorry if I've been too harsh on you here, but hey, it's how I feel.

Look for the photo-montage cartoon next week.