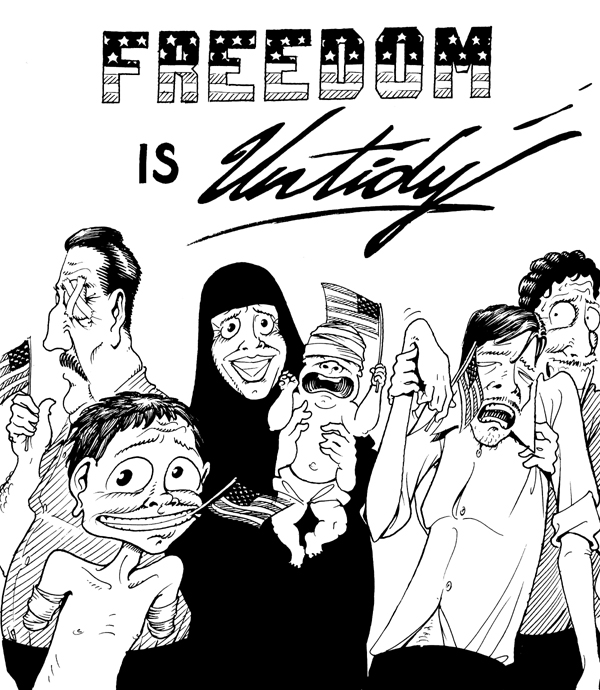 The title is a quote from Donald Rumsfeld. He was referring to the looting in Baghdad, not civilian casualties, but one of the great advantages of cartooning is that it is unfair. I have to admit I'm not very happy with this week's cartoon--it's more like a placard you'd see at a rally than a cartoon. Didactic rather than funny. At best, I think it might make you cringe, but not laugh. Now that I think about it, it basically depicts the same grim irony as the Onion story, "Dead Iraqi Would Have Loved Democracy." Believe me, I hate it when this happens, when I have to send in something I don't think is funny. But I'm afraid it's the best I could come up with this week. I sat around in McSorley's Saloon reading The Times and doodling all afternoon on Sunday and it didn't help. It just hasn't been that funny a week.

I know we're all supposed to come on board for the big win now that that tyrannical, bloodthirsty statue has finally been toppled, but I did think it was worth reminding people that we had to accidentally kill and maim a lot of innocent Iraqi civilians to do it. The only difference I can think of between Americans who passively "support" the war and terrorists is that terrorists actively target civilians, which we would all agree is bad, while pro-war Americans just matter-of-factly accept that some Iraqi civilians are inevitably going to get collaterally damaged (to which they always pay perfunctory lip service by saying "of course any loss of life is a tragedy...") but hey, what are you gonna do. Both groups share the philosophy that you can't make an omelette without breaking some eggs. This does not seem to me like a clear and defining moral distinction.