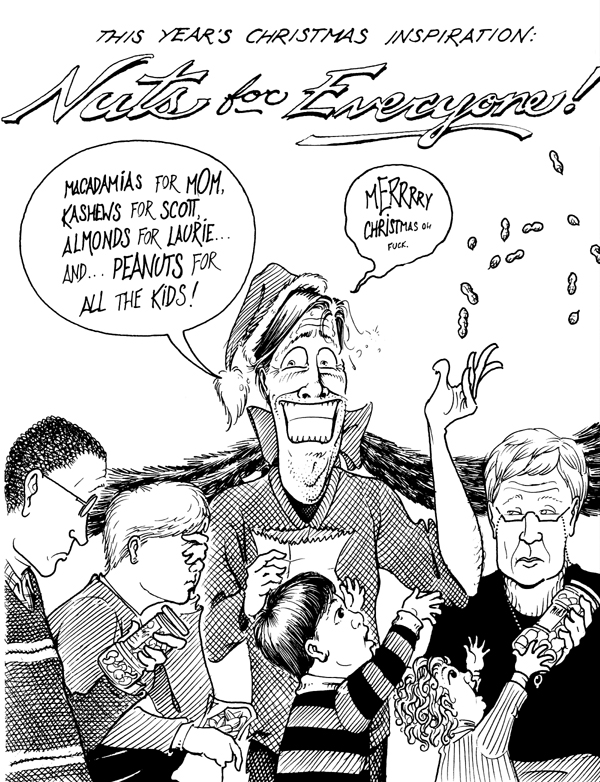 I had my annual Christmas meltdown in a Border's or a Barners & Noble, one or the other, the afternoon of Christmas Eve this year. After a nerve-wracking struggle I had finally determined, with the help of my supremely cromulent shopping consultant exactly what I was going to get for each of my family members, but of course it was Christmas Eve, and the stores were by now sold out of all of those things. As far as I'm concerned the only reason you'd ever even go to one of those chain bookstores is because you're desperate and you've put things off until the last minute and you know, for a certainty, that they will have whatever item you've arbitrarily fixated on. Except they didn't. They said there was a copy of one of the books I was looking for at their store in Columbia, an hour's drive away. I sagged in resignation. For a time I lost all will to live. I drifted around the crowded store, staring dully at books, unable to comprehend what their titles could even mean. I clutched my forehead in despair. I remember there was a coffee-table book on display called Extraordinary Pigeons. Extraordinary Pigeons? Extraordinary fucking Pigeons? Suddenly my despair turned to rage and I delivered my yearly traditional Christmas rant, the theme of which, as always, was my fierce and abiding hatred of Christmas and everything associated with it--Christianity, Consumerism, winter. Who was this fucking holiday even for? Look at all the people around us, I cried--dazed customers lurching around like accident victims, clerks haggard and exhausted, barely conceling their contempt, just waiting for a break to get stoned in the stockroom. Everybody hated it. It was killing us all! The only people who benefit from Christmas are children and retailers, I said, two groups who as it happens I also hated. Greedy bastards! Fuck them--fuck them all. Fortunately my shopping consultant was amused by my tantrum rather than exasperated or disgusted and gently helped me regroup, for which I remain grateful. In the end I wrote a bunch of bad checks for crap I did not want. Only then was I allowed to get the fuck out. I had fulfilled my Christmas duty. Outside on the sidewalk, a broken man, I grumbled, fuck it--next year I'm getting nuts for everyone. We both broke down laughing hysterically--and I do mean hysterically, weakly giggling and weeping in a sort of giddy delerium brought on by several days' cumulative exhaustion, hangover, and the horror of the motherfucking holidays.

Although the central character in this cartoon is me, the family members around him are only loosely based on my actual family and are not intended to be likenesses of them. In other words I've never drawn my family before and they didn't turn out to resemble them much at all. The mother, in particular, came out looking much older and sourer than my own mother, so, Mom, please do not be offended by this drawing, and thank you for the sweaters and the blanket with the wolves on it.

Anyway, the holidays are over now, which is all that ever really matters about them. The only hurdle left before I can resume what passes, for me, as a normal life is New Year's Eve, which is more my kind of holiday--a celebration of nothing, involving excessive drinking. It's been a shitty year. Here's hoping the next one's better. Next year, nuts for everyone!