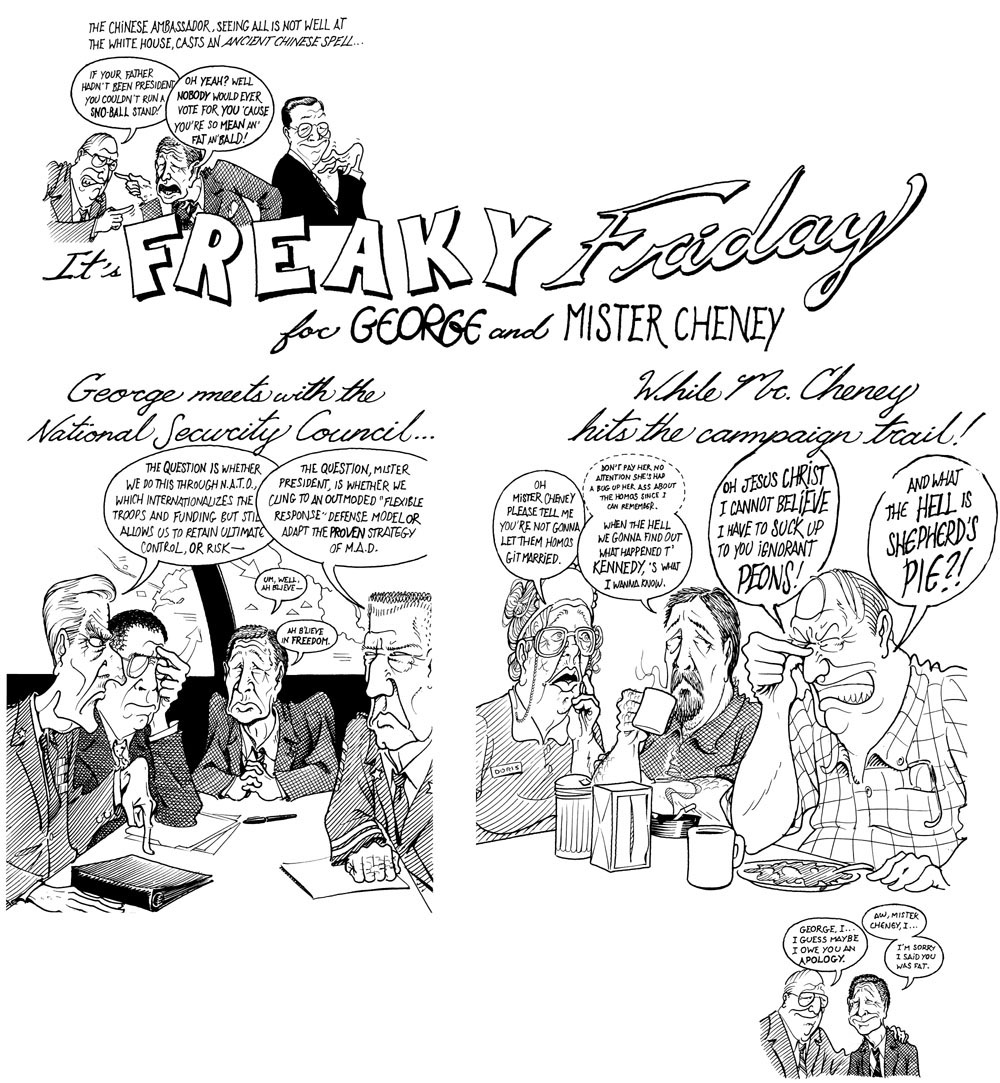 Thanks for this one go to Megan, with whom I thought it up over breakfast at the Odessa Cafe. I'd blown off working on my cartoon to spend her birthday with her and in the end--as always--blowing off work proved to be the most constructive thing I could've done, since by the time we parted ways it was, as I like to say, all over but the drawing. The drawing, however, consumed all of Friday up until two hours past deadline and left me exhausted, so possibly there's some limit to the wisdom of the blowing-off-work strategy.

Last week I was contemplating never again referring, visually or otherwise, to George Bush in my cartoons, despite the fact that he's so easy to caricature and so fun to mock, because by all inside accounts it is actually Dick Cheney who is effectively the President of the United States. Of course all presidents have relied on advisors, and some have been more engaged than others--Ronald Reagan wasn't exactly a micromanager to start out with and seems to have been asleep at the wheel and suffering from senile dementia for the last few years of his presidency--but it's both scary and insulting to my intelligence to see a president taken seriously who is so obviously nothing more than a paid spokesmodel whose only job it is to get the people in power re-elected. I figured that the most accurate and contemptuous way to deal with him would be to refuse to acknowledge him and always refer only to President Cheney. I was turning over a vague idea for another "Election Guide" cartoon that would've examined the most critical question of the '04 election: Can anyone beat Cheney? Which seemed to me like an absurd premise on the face of it, given that Cheney is so venal, scandal-ridden, and openly scornful of public opinion and the law, plus calling him "uncharismatic" would be a diplomatic way of putting it--I mean the man looks uncannily like Mr. Potter, the crippled and bitter old banker from It's a Wonderful Life.

But in the end I couldn't let George go. I just love the guy. Did you see him on Meet the Press, doing that weird, pathetic smile that looks like a cringe as he said, "I believed that we would find weapons."? O the poor little monkey-faced President boy! O boo boo boo boo boo! See, this is why I can never bear to watch him on TV; if I just read about his policies and speeches in the paper or hear him on the radio, I can keep loathing him, but as soon as I see that hapless simian face I start feeling sorry for him and hoping he won't fuck up too bad and getting mad at that mean Tim Russert for asking him such hard questions. So the Freaky Friday solution seemed like the perfect way to illustrate the situation, and, more importantly, lets me indulge my perverse affection for the cartoon characters George and Mister Cheney. Oh, they may exasperate each other, they may even fight, but they know they need each other. And underneath it all they really love each other. If I hadn't already been two hours oper deadline I would've added just one last word balloon, after George says, "I'm sorry I said you was fat," of Mr. Cheney saying, "Oh, hell, I could afford to lose a few pounds." It brings a goddamn tear to my eye. I am an idiot.