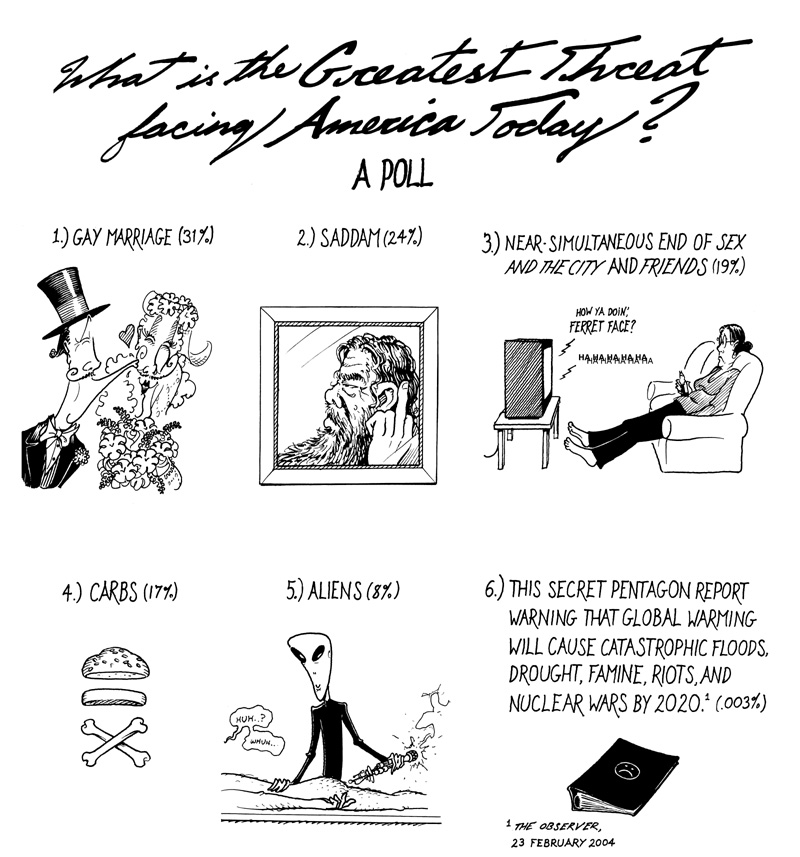 I had already decided what this week's cartoon was going to be and even drawn three of the panels when my old Jaegerbuddy Elena in Seattle forwarded me a link to the following article:

After reading this story I spent the rest of the afternoon in the sort of shock that afflicts people in science-fiction stories who get an unwelcome glimpse of some apocalyptic future and then spend the rest of their lives as mad street prophets shuffling around impotently warning everyone that they're Doomed. I mean I knew the scientific evidence for global warming--the correlation between carbon levels in the atmosphere and global temperatures as recorded in antarctic ice, the shrinking of glaciers, etc.--and I understood that the implications were grim, but this kind of Book-of-Revelations rhetoric coming out of the Pentagon--not, traditionally, a hotbed of spittle-flecked alarmism--and the terrifyingly short timetable really shook me. Every headline I saw or heard, from "Gas Prices to Skyrocket" to "Haiti in Chaos" and "Could Be Top Pick in NFL," seemed petty and transient and meaningless, like illegible print on old yellowed scraps of newspaper half-buried in the ice. I considered giving up not only on the cartoon I'd been drawing but on cartooning in general, just saying, like, fuck it, finding a girl to marry, and cashing out all my stocks to buy a plot of land in the Canadian Rockies, a shitload of canned goods, and my own Thompson gun. Instead I drew this.

Human beings' risk assessment is notoriously unrealistic and superstitious; the entire Midatlantic region lived in a state of mild terror of The Sniper for several weeks, but most of us only glance with annoyance in the rear-view mirror at a tailgating 18-wheeler that would smear us into a pate` if we had to brake unexpectedly. Now we (or the national media, at least) are obsessed with the mostly symbolic issue of gay marriage while al Qaeda quietly plans its next attack and UV radiation inexorably burns away the ozone. And our cynical leaders are always ready to take advantage of our stupidity. It just infuriates me that George Bush, who would blink at you as blank-faced as a toad if you asked him to define "UV radiation" or "ozone" or even "molecule," continues to lie about the clear evidence for global warming and call for "more study," just like his oilman father did twenty years ago, preferring to risk forfeiting the entire future of the human race rather than cause his campaign donors in the petrochemical industry any inconvenience at all. He's a dumb, gutless little prick, and I'm afraid it's not much consolation to imagine that his name will be vilified by our grandchildren, or that his gravesite will be lost under fifty feet of ice.

The panel about the dreaded Carbs, by the way, has been floating around in my head for several weeks, ever since I heard a woman with one of those very loud, piercing voices detailing her own variation on the Atkins Diet in a cocktail lounge, and it occurred to me that it might be an even trade-off to die a decade earlier if it meant you didn't have to have boring conversations about your diet.

I've calmed down about the global warming thing since last week, but this probably only means I've successfully erected some sturdier new fortifications in my denial. If there are any girls reading this who would like to marry me and then go live in the Canadian Rockies with a shitload of canned goods and a tommy gun to await the glaciers, you may contact me through this web site.