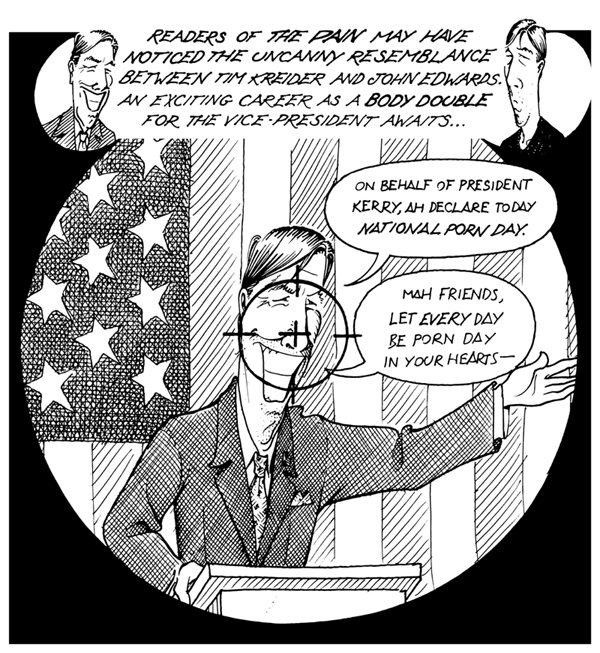 It really is true that I bear an uncanny resemblance to Vice-Presidential candidate John Edwards. During the primaries last winter strangers would approach me every day to tell me I looked exactly like him. (The day after he gave his concession speech I happened to be hanging out in an Irish pub in New York and some guys called down the bar to me, "Aw, John, has it come to this already?" They bought me a Guiness.) The effect is heightened when I wear a suit with an American flag pin in the lapel. I've had people ask to pose for handshake shots with me when I wear the suit. So I figure there's a bright future doing lookalike appearances at fundraisers and gas station openings for The Kid here, at least for the next few months. And if the Kerry/Edwards ticket actually wins the election, well, then, who knows? Maybe I really will get to be a body double for the V.P. I think I'd do well at state funerals and other protocol occasions; I am well known as the politest man in Baltimore. And frankly I don't see why I couldn't take over some of his real responsibilities; I have almost as much experience at governance as he does, and I can write a mean stump speech too. Edwards and I also both have tragedies in our personal backgrounds: he lost his teenage son in a car accident, and I got stabbed in the throat. He started out with nothing, and through ambition and hard work turned himself into a person of means; I started out with means and through laziness and indolence turned myself into nothing. But inevitably, I suppose, I would spontaneously introduce some bonehead initiative like Porn Day and have to be dispensed with.

I apologize to regular readers for the delay in posting the cartoon this week. I also want to take this opportunity to publicly thank my capable intern Phelatia for resolving my incomprehensible and maddening computer problems much more quickly, efficiently, and cheaply than I ever could have.