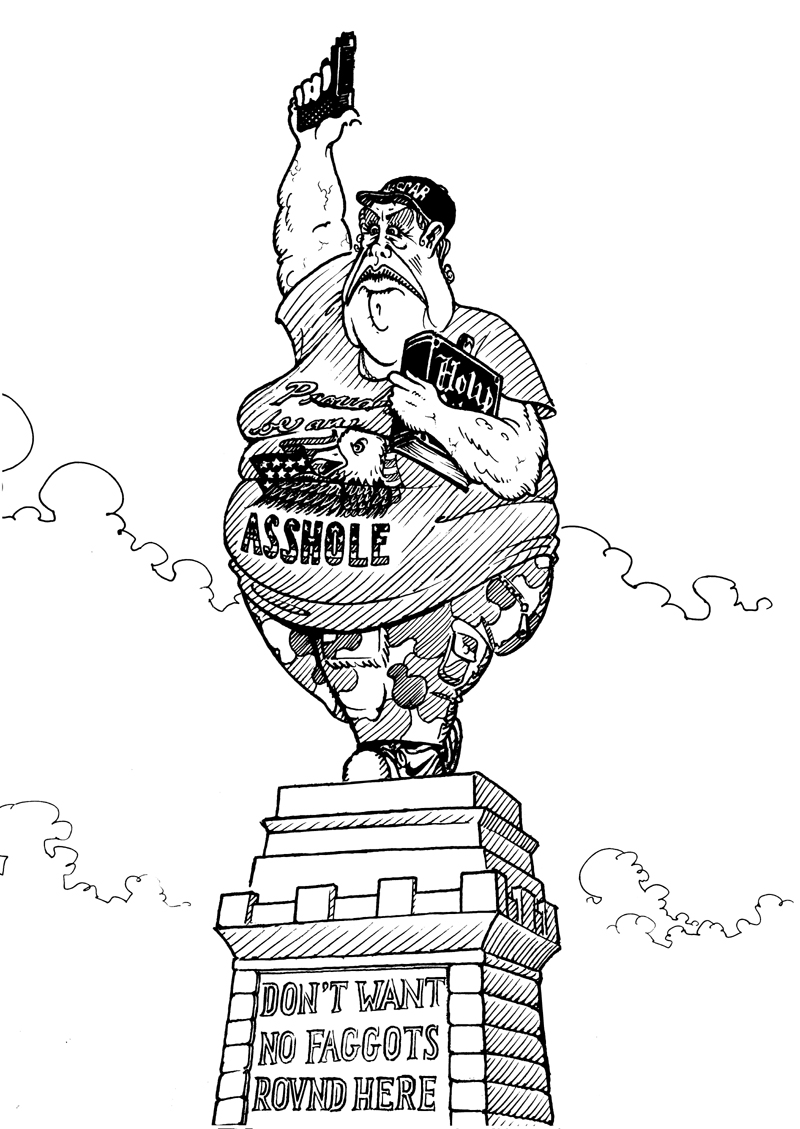 As regular readers of this cartoon might imagine, I was somewhat disheartened on Election Day. On Election Eve Megan and I, as we canvassed door-to-door in Philadelphia, were clinging to some hope that this election might restore our faith in the moderate center of American politics--the belief that, no matter how ignorant and apathetic most people are about politics, they are still fundamentally decent, not given to extremism or bigotry. But when the popular vote went to Bush I finally had to admit that my fellow Americans are unrepentant swine who deserve whatever happens to them in the next four years. Reportedly, the most important issues to voters were "moral issues" (code for "hate") and "terrorism," (code for "fear"). Our enclaves of civilization on the coasts are held hostage by those cowardly, bigoted hicks in flyover country. A sampling of messages from my friends provides a kind of collage of Blue-State despair:

From Boyd, my spiritual advisor:

Truly, I feel like I live in a country of people who are, in the end, intolerant, racist, homophobic, women-hating whackjobs. With the Republicans gaining wider margins in Congress and the Senate, and with Bush getting to appoint at least 3, if not 4, Supreme Court justices, the overturning of Roe v. Wade seems like a done deal at some point during the next 4 years. I would jump out of my office window if I could.

I'm pretty depressed and disgusted today myself. Moral Values?! We're clearly on our way deeper into the new Dark Age. The fact that people can be so easily manipulated by issues such as gay marriage is frightening. I've got to try to think about something else...

We now have to accept that the majority of the people in this country went for the fear, the lies, the solipsism and all. And the next four years--well, I can't bear to think about it too hard right now, but it feels grim. It seems like the Dems really tried their best--everybody did a little more this year than they've ever done before, but it still wasn't enough. Clearly we were deluding ourselves that a lot of Republicans were secretly unhappy w/George.It's a tough moment. We had such hope... It would seem the joke is on us---- it is us in the biodome, trying to ward off the sad fact that America is a nation of selfish, hateful, fearful, intolerant dimwits.

Who can possibly be next? An actual retard? A vacuum cleaner? A bucket of ham?

Way to go dude, we won PA. Why the fuck didn't you go to Ohio you lazy bastard! Arbeit macht frei! Get use to saying that... fuck!!!!!!!!! you wannna get drunk this weekend? I'll be in newark, drinking and drinking... fuck I am so disappointed I could weep. I think I might be a little scared.

In short, I am now advocating mass suicide. I am imagining a long line of Democrats all leading up to the rusty oil drum, and Bill Clinton himself ladling out the Kool Aid, the bodies stacked up all around. Grim, yes, but when you consider the alternatives...


And from evil genius Aaron Long:

Not quite sure what to do with this, but, being a basically evenly divided country, and with people generally not being coy about their political affiliation, if every Democrat killed just one Republican...

But then I talked to my friend Steve, who, as always, offered a unique and refreshing perspective on the situation: Fuck those people, man. At least all our states lined up solidly on one side and theirs on the other. It's time to build a wall and just say fuck 'em. It's their manufacturing jobs that are being sent to Mexico and India and China; it's their kids who are being sent to Iraq and coming home in boxes. If they love fetuses and hate fags so much that they're willing to consign themselves to yet another generation of ignorance and poverty, who are we to stop them? Meanwhile we East Coast Ivory-tower liberal elites will weep and wring our hands all the way to the bank--especially once the Republicans repeal the estate tax. I'll be rollin' in it.

Undeniably, these are dark times, and they'll get much darker. But let's not forget: governments have always been corrupt, duplicitous, and brutal. Patriotism is just a scam used by villains to get morons and suckers to pay taxes and kill strangers. The only loyalties in life that are worth shit are those between people who actually care for each other. Cheers, my friends and allies.