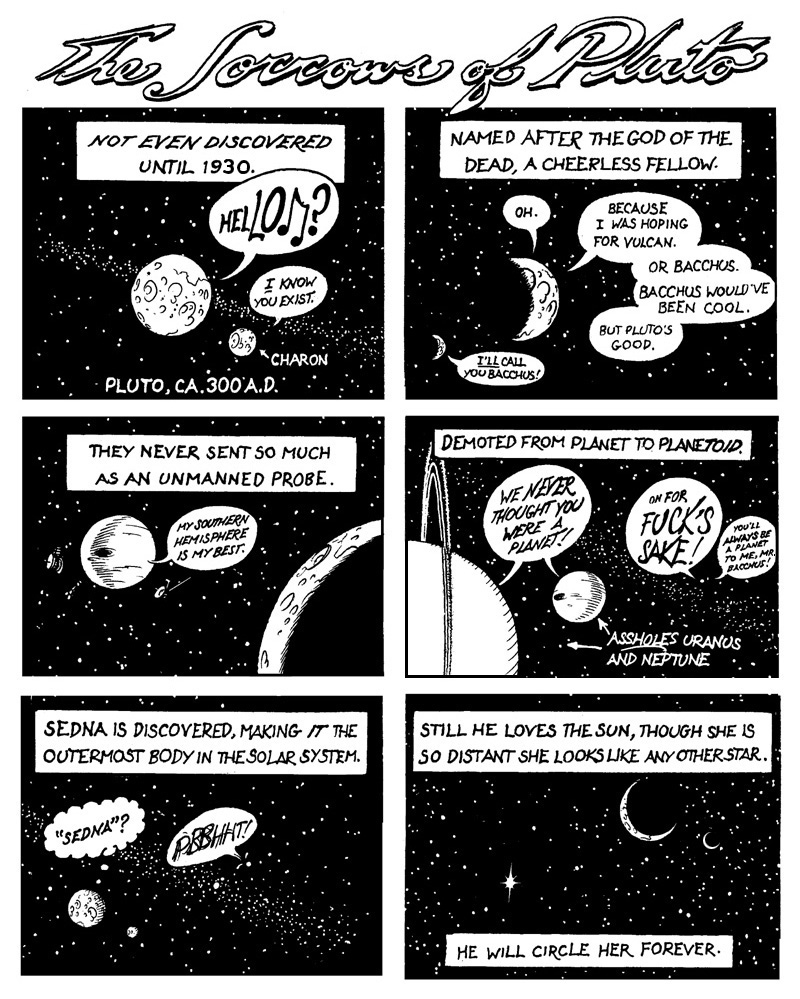 I mentioned this idea in last week’s statement. I had abandoned it because it just seemed too unspeakably sad to finish, but then it turned out to be somewhat timely this week because of the successful landing of the Huygens probe on Titan. (Plus my only other idea turned out to be too time-consuming to draw before deadline. You’ll see it next week.) That set of images is currently my favorite thing in life. For the first time ever, a shoreline on another world. Plus, hey, it’s orange!

I’ve felt sorry for Pluto for a long time (though it doesn’t go back nearly as far as my sympathy for Nixon, featured in last week’s cartoon), especially since astronomers demoted it to sub-planetary status. I have a friend who got her first novel accepted for publication only to be called back the next day and told that they’d changed their minds. I imagine that Pluto must feel like that now. In my address to the Forum on Outer Planetary Exploration 2000-2020, where I had already had to listen to some smug planetologists talking I-told-you-so shit about how they’d never thought Pluto was a real planet, I took a stand: I told them all that, first of all, no way was I or anyone else about to unlearn anything we’d been made to memorize in grade school, plus, more importantly, no takebacks. Planets are like Supreme Court justices: once they’re in, they’re in for life, and you can’t just kick them out no matter how unqualified they may turn out to be. Okay it is true that Pluto has an extremely eccentric orbit at a crazy angle to the ecliptic, plus it apppears to be just a big hunk of frozen crud halfway between a comet and a planet that got sucked in from the Kuiper Belt. My point is: so what. Fuck it. If Pluto’s not a planet then I don’t want to be one, either. Earth should resign in protest. All the terrestrial planets should join together and say, if Pluto’s not good enough to be in the solar system, I guess we’re not either. So maybe it’s mostly ice instead of silicates. Is this reason to ostracize it? To me this seems like chess club nerds making fun of kids with speech impediments, or African Americans trying to deny civil rights to homosexuals. Let’s see some solidarity among the little guys. Let those big showboat gas giants be the only planets and see how they like it. Fucking Uranus and Neptune. Whatever.

Although as I originally conceived it Pluto was the protagonist of this cartoon and the object of all my sympathy, as I drew it, it was little Charon, Pluto’s moon, who emerged as its true tragic hero—the Marcie to Pluto’s Peppermint Patty, unrequitedly lovestruck, loyal to the end of time. Thanks to Carolyn, who pointed out that Charon should call Pluto Mr. Bacchus.

I don’t know why I keep drawing cartoons about things I feel sorry for. I recently read a piece by Jonathan Franzen about rotating the stuffed animals on his bed so none of them would feel left out, and playing with boring games so they wouldn’t feel neglected. (This was when he was a child.) That is so me. A tsunami kills a hundred thousand people and I feel sorry for Pluto. Next week, a political cartoon, I promise.

Special thanks this week to my Seattle fans Dave, Cynthia, and Lilith, who took me out for beers and coffee.