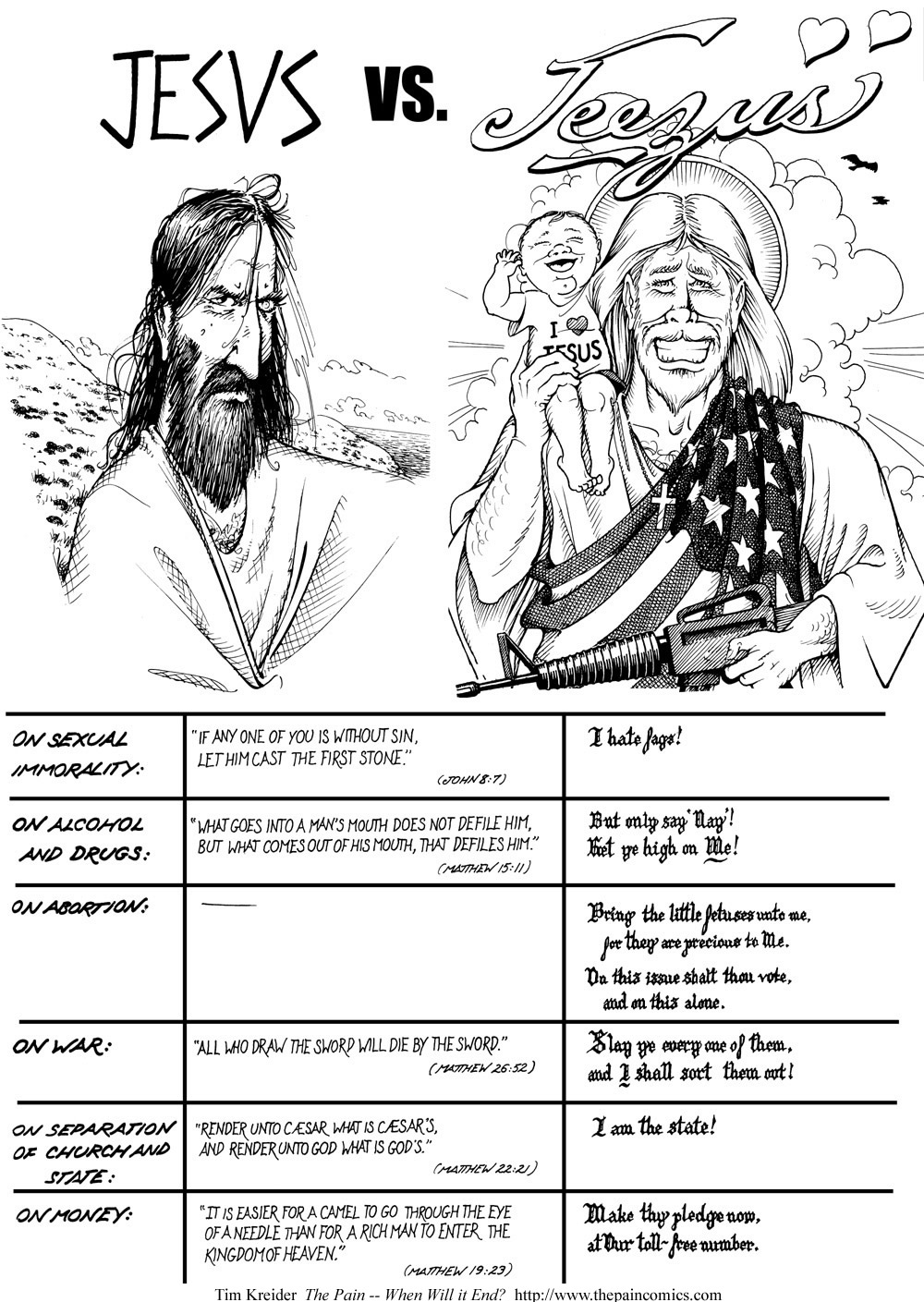 I have had it with the fucking Christians. And you know who I'm talking about. Not the Good Christians, who actually believe in, like, helping people-feeding the hungry, aiding the sick, housing the homeless, fighting injustice-but the ones in the news and in power these days, who are so keen to judge and punish and so suspiciously obsessed with sex. The ones scheming to overturn Roe v. Wade. The ones downplaying the effectiveness of condoms to teenagers. The ones preaching abstinence in Africa. The ones who believe in Creationism and want prayer in the schools and think George W. Bush is "a godly man." The born-again, angel-believing, fag-hating, eighth-grade dropout Evil Christians.

All quotations from scripture are bona fide, although I mixed up the language from the King James and New International versions a little. I will admit to quoting scripture somewhat selectively-I am hardly the first to do so-to highlight the contradictions and hypocrisy of the Christian right. Jesus was a radical, but I'm certainly not claiming him as a "liberal." It would be anachronistic to try to define him in terms of contemporary political philosophies. Jesus was what we would have to call, by today's standards, something of a hardass. He said that divorce was illegitimate for anything other than infidelity, and that if you divorced your wife for any other reason you were making an adulteress of her. He also said that anyone who even looks at a woman lustfully had already committed adultery in his heart, meaning (as I interpret it) we're all fucked so why even bother trying to behave ourselves. And there's no getting around it, the Old Testament explicitly condemns homosexuality as an abomination, and Jesus did say that not one letter of the law would be deleted or changed before Judgement Day. But he also told us to love our enemies (Matthew 5:44) and warned, "Judge not, that ye be not judged" (Matthew 7:1). Of course Jesus believed that the apocalypse would come during the lifetimes of many of the people listening to him in the first century A.D., so as far as I'm concerned you can take everything he says with a grain of salt. Luckily I don't actually believe anything it says in the Bible so I'm free to think whatever I want. People who call themselves Fundamentalist Christians, however, don't get to pick and choose which passages they believe and adhere to and which to ignore. And it seems to me they've got some figuring out to do.

Drawing the "real" Jesus turns out to be tricky. The image carries a lot of baggage. We have absolutely no contemporary physical description of the man at all, and for some reason it's very important to everyone what he looked like. He has to be knowing, wise, compassionate, kind, stern, and humorous, all at once. Of course he ended up looking like Gandalf. My depiction is somewhat indebted to Chester Brown's characterization in his adaptation of the book of Mark in Yummy Fur-Christ as a fierce, high-browed, hatchet-faced desert prophet. In a moment of possibly misguided inspiration I gave him one blind eye, in imitation of Modigliani, who in his later portraits painted subjects he admired with one eye blank, turned inward, to suggest inner sight. Of course Christ wouldn't really have had a blind eye, or any other serious injury or deformity, because, duh, he could've healed it himself. The book of John, especially, is full of stories about Christ being mocked and chased away by crowds, so I'm sure we would've heard about the obvious contradiction if he'd had any physical infirmities.

Drawing Jeezus, on the other hand, was nothing but a good time: sanitized, kitschy, sentimental, racist, jingoistic-a big cheerful football player with twinkling blue eyes and feathered blond hair. I grew up in an Anabaptist sect that was persecuted early on for its insistence on the separation of church and state, so the sight of an American flag in church would have been tacky and offensive when I was a kid, to say nothing of Christ being draped in one. We were also one of the historic pacifist churches, so the image of the Prince of Peace wielding an M-16 is, to me, sort of obscene. But people actually pray over sporting events, imagining that God roots for one football team over another, they thank Him when they win Oscars, as though God were managing their Hollywood careers, so why not imagine that he's on our nation's side against all others? Pretty much everyone in every other nation-state in human history has believed the same thing.

As it happens, President Bush, continuing his habitual disregard for the separation of Church and State, has declared this Thursday a National Day of Prayer. I am hoping that all readers of The Pain will join me on that day in the following prayer:

O Lord, we beseech Thee in Thy Righteousness to smite George W. Bush. Smite him in his bowels, and let them be sorely inflamed. Assail his buttocks with scabrous boils, and upon his anus place a festering pustule. Visit a pestilence upon his wife, that she may smell of vileness and corruption. And smite his daughters with uncleanliness, that they may be rendered barren, and undesirable even to the lepers. Let Dick Cheney be consumed by worms and lice, and Tom Delay possessed by a demon. Lay low all the President's counselors, that brood of vipers, and let his evil schemes fall into ruination. May his armies retreat from the East in disgrace, and his domestic agenda be as a stillborn child. Plague his ranch with locusts. Let George Bush's deeds be as seeds upon rocky soil, and his name be written in sand. And let his immortal soul cast into the Lake of Fire, there to endure torment everlasting. We ask these things in the name of Thy Son, Jesus Christ. Amen.

I've been thinking lately maybe I'm going to give my life to Jesus. If that happens, just watch out, is all.