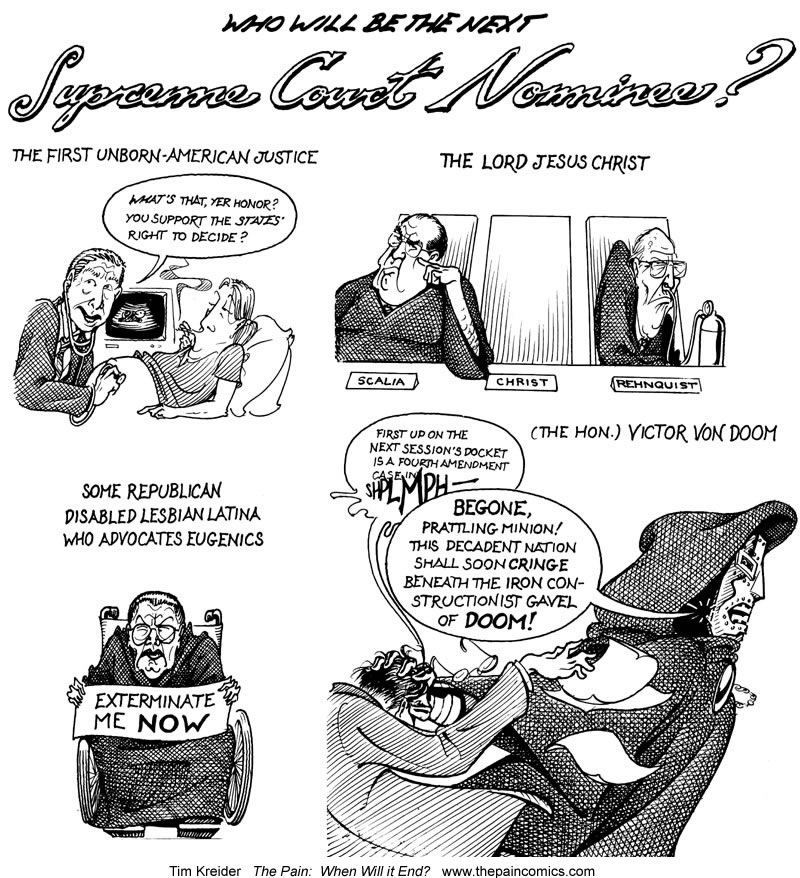 I was struggling with the week's cartoon (among other issues) Friday morning when I learned that Sandra Day O'Connor, the historic first female right-wing hack appointed to the Supreme Court, had announced her resignation. This news came around noon, and my five o'clock deadline was absolutely inflexible this week. My friend Isabelle had already suggested a "Who Wouldn't You Vote For Over George W. Bush"-type cartoon about the various nominees we'd rather see on the bench than William Rehnquist, who had surprised everyone by remaining grimly determined to hang onto his seat until he died in it. So my premise was cut out for me; all that remined to do was fill in the humorous candidates. Jesus and the fetus were the obvious choices. The disabled lesbian Latina is only a slight exaggeration of the minorities who nonetheless support intolerant and regressive policies that the Republicans always seem able to dredge up from the ranks of mediocrity--e.g., Clarence "Long Dong" Thomas, Alberto "The Torturer" Gonzales, and Condi "Three-Day Bra" Rice. The last panel remained blank until alarmingly late in the afternoon, when I finally sent out a desperate Emergency Humor Consultation to my inner circle of advisers. From webmaster Dave came the suggestion, "The Thing." Now The Thing is generally a reliable comic standby, but in this context I had some reservations about using him. The Thing is a flawed man in some ways, but I think I would endorse more of his court decisions than not. Dr. Doom, on the other hand, seemed more like the sort of candidate the Republicans would put forward--tough, hard-headed, and a strict literalist, with a lenient attitude toward illegal detainments, invasions, and war crimes. It was also extremely fun to emulate the kind of florid rhetoric the Lord of Latveria is always spouting.

For the record, I suspect that this next Supreme Court nomination, and the case that'll challenge Roe v. Wade (doubtless already carefull chosen), and the ensuing battle over abortion may prove to be the Fort Sumter of the 21st century. Not that I expect it'll actually come to armed conflict, but in case it does, I know which side I'm on, I have easily defended ground, and I know how to operate a fully automatic weapon. Remember what happened last time, Red States--you lost. We humiliated you then becaue you had it coming, and we'll do it again because you're just too dumb to know when you're beat. Just give up and let yourselves be dragged into the civilized age.